Such an important annual tradition!

The SS Mont Blanc, a French cargo ship fully loaded with wartime explosives, collided with the Norwegian vessel SS Imo in the Narrows, a strait connecting Halifax Harbour to Bedford Basin. A fire on board the French ship ignited the cargo causing a cataclysmic explosion that destroyed the Richmond district of Halifax. About 2000 people were killed by debris, fires, and collapsed buildings, and another 9000 were injured. A huge disaster for Nova Scotia and it’s capital Halifax.

South of the border in Boston authorities learned of the disaster via telegraph, and quickly organized and dispatched a relief train.  A winter blizzard following the explosion delayed the train, which finally arrived in the early morning on December 8, and immediately began distributing food, water, and medical supplies. Numerous personnel on the train were able to relieve the Nova Scotia medical staff, most of whom had worked without rest since the explosion occurred.

In 1971 this gift of a Christmas tree was revived by the Lunenburg County Christmas Tree Producers and later taken over by the NS government. Knowing the symbolic importance the tree represents to both cities, there are  specific guidelines for selecting the tree. It must be a balsam fir, white or red spruce that is 40 -50 feet tall with a beautiful green color. The trees are often chosen from open land privately owned by local ordinary people. People that love the tradition of this gift and are truly honoured that “their tree” for Nova Scotia’s gift to Boston.

This year’s tree was cut TODAY! This morning at 10:30. And then tomorrow there will be a special send off  with love and special wishes from Grand Parade square in Halifax

Bill and Andrea MacEachern of Lorne, Pictou Co. are the donors of the 49foot White Spruce that is approximately 72 years old. The tree will be delivered to Boston city to it’s place at the Boston Commons to be lit at the tree lighting ceremony on December 3. 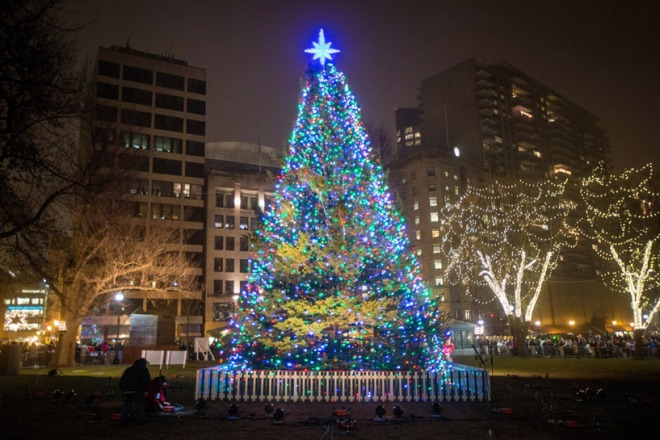 One thought on “A gift for friends”